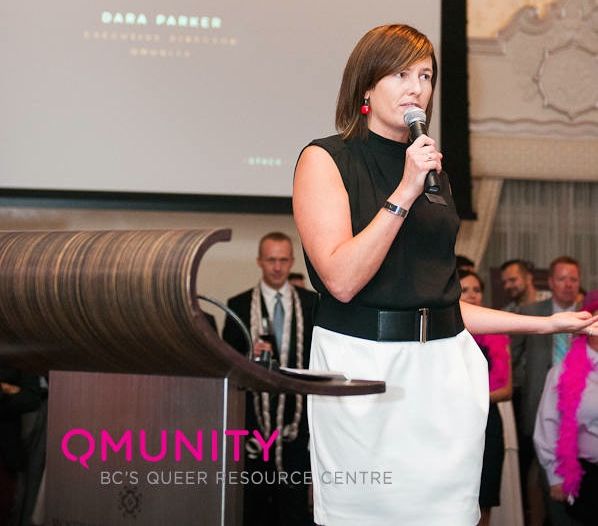 The first thing that struck me when I met Dara Parker was her intelligence and knowledge of gender and social policy. She is the go-to person for local news programs when LGBTQ issues are on the agenda and is a frequent contributor to local newspapers. She doesn’t miss a beat when confronted with difficult questions and explains intricate subjects with patience and compassion, but perhaps her most inspiring feature is her quest for the job that fulfilled her purpose. Dara is the executive director Qmunity, B.C.’s queer resource centre. “For me work and life are intertwined. I intend to live every part of my life with purpose. I’ve always seen an inequity in the world, a lack of fairness that has made me very frustrated and I wanted to change it. I want the world to be a little bit fairer. It seems ridiculous that I have been born into so much privilege because of the colour or my skin, my citizenship, my first language, my abilities. I always felt a responsibility to even the playfield a little bit,“ she explains.

Her journey had its share of uphills, downhills and detours. “I worked in a lot of jobs before I found the right fit and that was very frustrating because I have several degrees, lots of travel experience and have volunteered most of my life. I didn’t feel I was really living my purpose, offering my skills in a meaningful way or making change.”

Back in 2010, she was working for the local government as an urban planner, but there was still something missing. “I wasn’t a very good fit, I am not a very good bureaucrat,” she explains. “I would rather break rules than uphold them.” She didn’t know what the next move was so she made one courageous decision: she took the time to figure out what was the next step. She quit her job, sold her apartment and took a year off. During this time, she moved to Spain to learn Spanish and travel around. She considered getting a second master’s degree in Journalism and applied to the program at UBC, but she was hesitant of being a student again and becoming overeducated and underemployed. Simultaneously, she was looking for a job and was offered a contract at an international development non-profit. The contract was for only four months, but when the time came to choose between the job and the master’s program, Dara chose the contract. This experience reinforced that she wanted to get back to the non-profit sector. Five months after finishing the four-month contract, Dara began working as the head of Qmunity, “This is the first job where I really feel like this is what I am supposed to be doing and where I am supposed to be,” she adds. 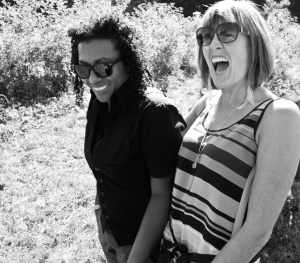 Dara and her partner, Nata Belcham

There are many issues and causes that Qmunity tackles, but one of the most consistent themes is loneliness. “I think if you are different in some way, you have a non-normative sexual orientation or gender identity, you might feel excluded and therefore lonely then you are more likely to experience isolation and it is dangerous. It can lead people to addiction or mental health problems. The more we build community, the more we tackle loneliness. We create a stronger fabric that provides a safety net for people. ”

Dara witnessed the power of Qmunity a few years ago when she was feeling disconnected from the queer community. “I volunteered with the youth program and I watched them create a safe, unique space where these youth – that I knew didn’t have it easy in their daily high school lives because of how they look or felt – could come and see other people like them and have their gender identity respected. It’s like the first time you meet another woman who likes other women. I watched that happen with the youth and it was transformative for me.” Dara believes that by building community we create a stronger fabric that provides a safety net for people. “Human nature is to collect and find similarity. We want to find others like us.” She explains her work as the business of diversity. “I think diversity is inherently good and the more perspective you can gather, the stronger the solutions we can build together and the stronger we can be.”

There is still so much work to do in B.C. Dara acknowledges that the majority of the LGBTQ legal rights have been gained, but she explains the work is focused on translating those legal rights into lived equalities, so that in the day-to-day experiencia, people feel safe, included and celebrated for who they are. “I think it is more difficult to name the enemy who is not overt. It is one thing if somebody comes up and punches me because I am a dyke. But it’s another thing if someone doesn’t serve me, quietly walks away or politely declines to marry me because it’s against their religion.”

“I am a queer woman, I live in Vancouver Canada, which is probably one of the best places to be if you are queer woman, but still it’s not perfect. There’s still so much work to be done, but I know how lucky I am to be in this city and this country,” she says. “I think of other queer women, men and trans people around the world. When I hear the heartbreaking stories, I realize it’s just a flip of a coin – or whatever it is that determines our fate – that enabled me to be born in a Canadian context, instead of Syria, Kenya or Sri Lanka. Those lives are at risk for no reason other than who they are and where they were born. That doesn’t seem fair. That’s why our freedom is intimately bound up with everyone else’s freedom and until all of us have the ability to live our lives with safety and dignity, then none of us have real freedom.”

QMUNITY is deeply invested in making sure our diverse communities’ needs and priorities are identified and reflected in our future planning—including the programs and services available at our new facility. Please take 10 minutes to take our community-wide survey, or sign up to one of our two-hour Small Group Dialogues.

'Dara Parker: Living her Purpose' has no comments